Today we left Cambria and headed north towards Big Sur and Monterey.

After having breakfast at the hotel, we checked out, loaded up our gear on the Ural and hit Highway 1 for what was to be the most scenic part of our trip.

First we stopped and got gas in Cambria. While filling up the tank, a guy came by to talk about the Ural.  Turned out he had driven down from Monterey to pickup avocados from a local farm there in Cambria (that’s a long way to go just to pickup avocados for a restaurant).  He told us all about how some of the best avocados are grown in this area and how they do really well and have a better taste because of the coastal valley temps and fog. I told him how I love avocados and how my mom has an avocado tree and I ate them a lot while growing up. He said hold on a minute, went to his van and brought us four avocados that he gave to us – that was really cool and I thanked him. We enjoyed some of those avocados slivered up on crackers at a picnic lunch we had later in the day.

Checking out the views

From Cambria we rode highway 1 up the coast with lots of spectacular ocean views.  We stopped off several times to check out beaches and scenery and took lots of pictures. One fun place we checked out was the Elephant Seal Sanctuary where we saw lots of elephant seals lazing on the beach with some fighting with each other playfully. They sure do make odd guttural like noises, it’s really weird to hear.

We also stopped at a favorite spot of ours on the coast – the tiny roadside gas stop/store/bar/hotel/town called Lucia.  Just prior to Lucia we had stopped and checked out our #1 favorite campsite in the world – Kirk Creek campgrounds, which are situated on the cliffs overlooking the rugged yet beautiful oceans with big waves breaking below.  For lunch later we stopped at Pfeiffer State Beach and had a nice picnic under the trees. 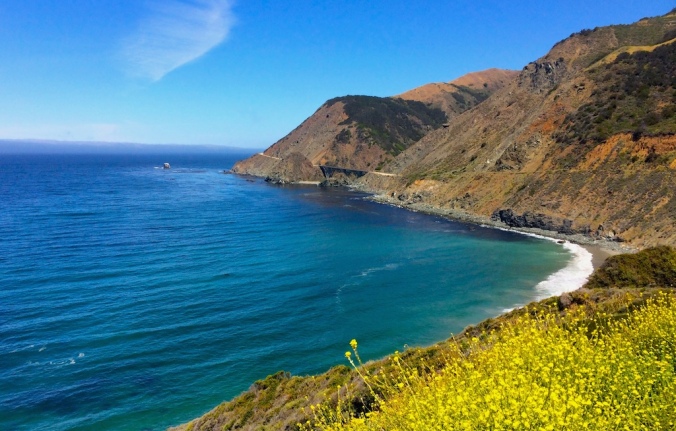 Later as we rode north and got near Carmel, we pulled over and went on a hike that we found near our parking spot – it turned out we stumbled on some really spectacular scenery and coastal views that were incredible at this location. We looked around and hiked along the cliffs on a nice little trail overlooking the beach below. As could be expected we took a lot of photos and videos of the beautiful scenery that was all around us. This was a very special place, it was hard to leave it but we had a few more miles to go before our stop for the night.

Roadside tree and our Ural

After our hike we rode up thru Carmel and onto the 101 and into Monterey where we stopped for the night at a Best Western hotel.  We got unpacked, settled and showered then headed out on the town. The two of us walked down to Old Fisherman’s Warf to check out the shops and scenery.  After stepping into a few shops to admire the touristy knick knacks, we wandered around more and checked out a few restaurants and finally decided on one where we enjoyed dinner of seafood paella that we shared between us (at the Old Fisherman’s Grotto restaurant). I also had one of the best bloody Mary’s I’ve ever had that came with very tasty large fresh shrimp, it was so good I had to have two.

We finished dinner and walked around the pier and boat dock and listened to some local street musicians play for a while, then headed back to the hotel for the evening.  It was a nice way to wrap up a great day of riding on the California coast. 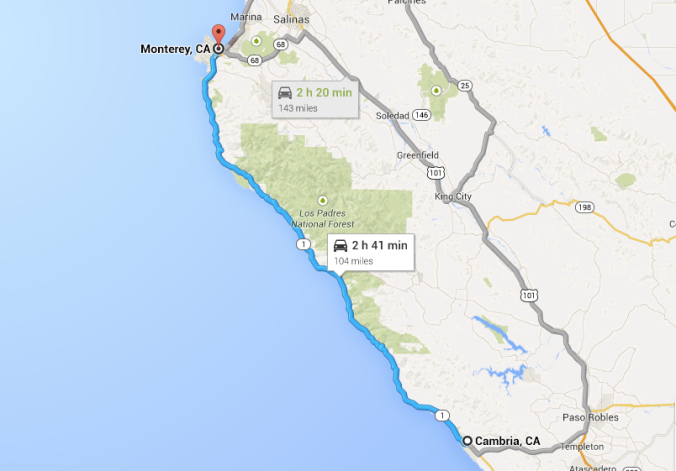