The Ural dealer we purchased our new Ural from in New England made this video after the modifications I ordered were added to the motorcycle. Soon after making this video, they shipped out my new 2014 Ural Gear Up 2WD Red October Custom, destined to arrive in SoCal at Boss Hoss Motorcycles in Harbor City.  I believe this is the second cross country trip this bike has already made – the next one will be with me and Ronda riding it.

Quick notes: my salesman Dmitry, at Ural of New England (featured in the video below) was great to work with and extremely knowledgeable about Ural Motorcycles.  Don at Boss Hoss Motorcycles, which also sells Ural’s, was a great help in getting my Ural setup for CA emissions and getting it registered for me (which can only be done by a dealer).

I had first heard of Ural motorcycles about 15+ years ago and the first I saw one was about 10 years ago in a storage facility where we were keeping our RV. It was an older yellow-ish one and when I saw the owner one time I told him it looked great, and asked if I could see what it was like. He said yes and I tried it on for size and thought, hey this could be one helluva fun ride!

The next time I saw one was about 3 years later as I was out picking up some furniture from a Craigslist ad.  The rig was covered but I asked the seller if that was a Ural and he said yes. Of course I had to ask him if he was selling that too and he said yes, but he wanted too much for it so it was not meant to be at that time.  The Ural was always in the back of my mind but I thought it was too funky to go out and buy a new one anytime soon.

Earlier this year the misses and I talked about getting another motorcycle, but this time we wanted something different and so I brought up the Ural, showed her what it looks like, what it does and we were hooked and ready to check them out more. We really liked the new model that featured better and more stable engine performance.  And so the search to buy one began….

I started my search locally but was disappointed to find that none of the dealers near me had any more than 2 models available and none were in the configuration that I was looking for.

I searched the internet and finally found Ural of New England and they had quite a few very nice Ural’s in many different configurations in their inventory.

I wanted the Gear Up 2WD model and found a great nice looking red one with black powder coated drive train and wheels and it looked great! We decided this was the one for us.

I contacted the dealer via the website and Dmitry (our sales guy) was quick to respond and so the purchase process began. I added a bunch of nice modifications/upgrades and we’re now ready to begin our adventures.

Here’s some photos of it taken at the dealership after they were finished with the modifications I ordered were all installed. 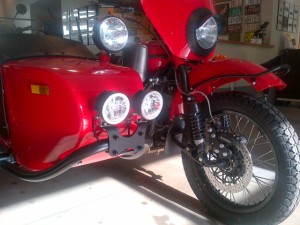 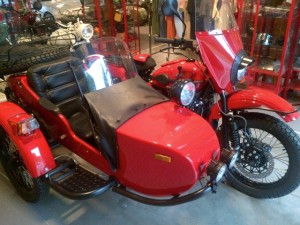